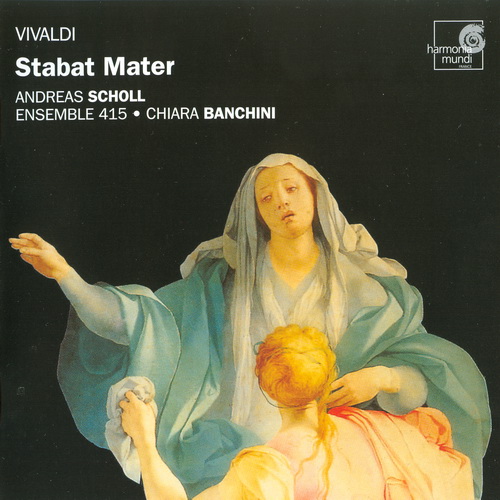 At first glance it seemed odd to me that an ostensibly countertenor programme of music by Vivaldi should have omitted his fine setting of the psalm Nisi Dominus (RV608). Let’s hope a recording is planned. Meanwhile, here is a very attractively prepared menu whose main course is the Stabat mater for countertenor and strings. Hors-d’oeuvres and side-dishes consist of a ripieno concerto (RV114), a chamber cantata for countertenor and strings (RV684), a string sonata in E flat (RV130) and an introductory motet to a lost Miserere (RV638).
Taken together, the pieces demonstrate something of Vivaldi’s diverse style as a composer. The two instrumental works offer the strongest contrasts, the Concerto suggestive, above all in its opening movement, of an opera sinfonia, the Sonata redolent with poignant suspensions and darkly sonorous in its first movement, but yielding to a tautly constructed fugue in the second. The chamber cantata, if closely related to the two sacred vocal items on the disc in respect of tonal colour, differs from them in character. Conforming with the standard Italian cantata pattern at the time of two pairs of alternating recitative and da capo aria Vivaldi enlivens his pastoral idyll with two particularly affecting arias, the first with a palpitating pizzicato violin, the second a virtuoso vocal tour de force illustrating the plight of the forsaken lover. The soloist Andreas Scholl brings the whole thing off superbly with only a moment’s faulty intonation at the close of the first aria.
Unlike settings of the Stabat mater by Pergolesi and some others, Vivaldi used only the first ten of the 20 stanzas of the poem. His deeply expressive setting of the poem will be familiar to many readers but few will have heard such an affecting performance as Scholl achieves here. The lyrical prayer of human yearning for faith contained in the “Fac ut ardeat” movement is most tenderly sung and here, as throughout the programme, sympathetically supported by the strings of Ensemble 415 under Chiara Banchini’s experienced direction. The Filiae mestae is well worth becoming acquainted with and is of an expressive quality that makes the loss of the Miserere itself all the more regrettable. An outstanding disc in almost every respect, and most highly recommended. I eagerly await the Nisi Dominus.'