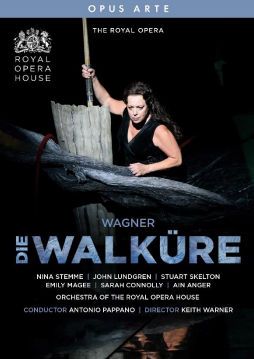 The history of performances of Wagner’s Ring cycle at London’s Covent Garden Opera House has been an enigmatic one. Artistic rosters have been strong, kicking off with Gustav Mahler conducting in 1892 and going on to include famous contemporaries of his (Richter, Mottl) followed on by a line of big names in the 1930s (Bruno Walter, Beecham, Furtwängler). Casts too kept pace with international casting levels (Flagstad, Hotter and Varnay from the 1940s; Nilsson and Windgassen later; then McIntyre, Jones and Tomlinson). Stage productions – copycat and dull in the ’50s and ’60s – reawoke with the choices of Götz Friedrich and Richard Jones to direct in the ’70s and ’90s.

Yet, despite a positive rash of ‘pirate’ recordings from private and radio sources – almost every major conductor’s work represented at least in part from the 1936 season through the 1970s – there was a marked scarcity of official releases. Testament’s takeover of a 1957 Rudolf Kempe broadcast was a first time for the house in this repertoire on a major label. The present release appears to be the first-ever filming of any of a Covent Garden Ring to keep for domestic viewing.

And it is good. The strong cast – surely including two current world leaders in Nina Stemme’s Brünnhilde and Stuart Skelton’s Siegmund – may be new to this particular staging but, in this most personal and emotional of The Ring’s operas, the performers relate as if they’ve been working together for a lifetime. It helps a deal that three vital operators have been with this cycle all the way since the early 2000s – music director Pappano, stage director Warner and camera director Jonathan Haswell. Although there is always something mind-catching to look at on the late set designer Stefanos Lazaridis’s busy stage, this has never been a spectacular or gimmicky Ring, more one of thought and depth of detailed text work in the human exchanges. Personally it’s Wagner’s King Lear truly come to life; politically a true saga of the gods battling in vain to hang on to the power and the insights they are finding humans are taking over for themselves.

It took a little time in this cycle’s various outings for this feast of ideas to become clear onstage. Various surprises (or directorial interpolations) now find a truer representation: the physical desire Fricka still feels for estranged husband Wotan; the hypnotic power Brünnhilde employs with her fingers to stop Siegmund killing his sister (no melodramatic last-minute sword grab); and the controversial but wonderful full-on father/daughter kiss at the peak of the Farewell Scene – now part of a breakdown movingly enacted by John Lundgren’s emotional Wotan. He’s a singing actor who really has the courage to explore the god’s ill luck, even at the expense of appearing weak.

There is some terrific singing along the way: Stemme’s strength of emotion and pinpoint negotiation of vocal intervals, Skelton’s clarity and an increasingly heroic sound, Magee’s sheer focus tapping the same level as her Strauss Kaiserin. These three especially present their text and notes without distracting hysteria. Pappano delivers a further degree of the Rudolf Kempe-like lyricism – nothing overstated but no lack of power or motion where needed – that he found from this cycle’s first Rheingold onwards. The orchestral playing is especially sharp and the brass, horns especially, can be proud of their negotiation of Act 1 so early in the day. The filming is above all a triumph of fidelity to the show in front of the cameras and of editing and cutting (from two performances). The sound does it precise justice. ‘Extras’ are a cursory non-event but maybe you can’t have everything. Very warmly recommended, especially if you were ever discouraged by this cycle’s inconsistent press reception.