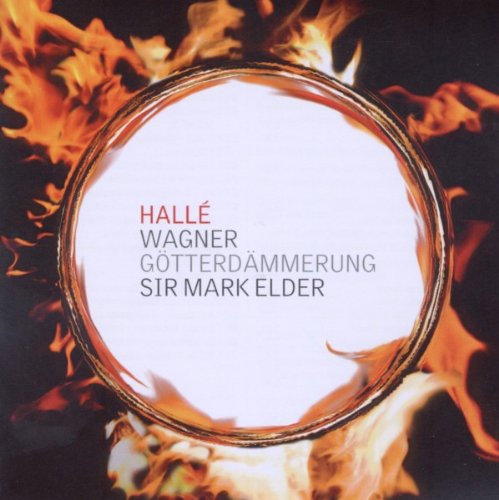 Recorded “live” over two nights at Manchester’s Bridgewater Hall last May, this performance serves as both culmination of, and progress report on, Sir Mark Elder’s first decade with the Hallé. It gives the players, in extenso, the chance to display their current skills and to show how the Hallé has come to reacquire, under Elder, its verve in Romantic 19th- and early 20th-century scores.

Although Elder was an early student of both Georg Solti and Edward Downes, relatively quick Wagnerians, his own Wagner has more parallels in texturing and overall Klang to the 1970s ENO Ring performances under Reginald Goodall (Elder’s act lengths are 122'18" / 70'48" / 90'58"; Goodall in London 1974 took 138'18" / 78'58" / 94'13", while the “fast” Clemens Krauss – at speeds more typical of today’s practice – travelled in 1953 at 115'09" / 66'48" / 75'10"). There is evidence of how Elder has absorbed Goodall-like detail and patience and passed it on to his players: the wind playing throughout, the needlepoint-accurate placing and enunciation of the timpani part, or the tricky string concertato under Gutrune’s final, vain attempt to denounce Brünnhilde in Act 3.

But Elder uses time to put distinct space or style into a particular scene more than to make grand, weighty effects. His Act 1 Gibich court, characterfully inhabited by experienced vocal actors Peter Coleman-Wright and Nancy Gustafson, is rather French in its instrumental cadenzas and trills – a reference Wagner surely intended. And much of Act 3’s longer-than-usual playing time is used, in the hunters’ feast scene that precedes Siegfried’s murder, for careful observation of Wagner’s pauses and tempo changes to achieve a tension not normally attained until the Funeral March proper.

The situation of a concert performance – including here the splitting of the opera over two nights – allows for greater freshness of voice and accuracy in passages like Siegfried’s exit aria in Act 2 (“Munter, ihr Mannen!”) or the intervals Brünnhilde has to negotiate in her Act 2 accusations. Attila Jun not only sounds like one of the blackest Hagens since the Greindl/Frick heyday but can place his bleating sheep imitations and other cadential moments spot on the note. Rhinemaidens and Norns (definitely some Wagnerians of the future here) are rich individually and together. Susan Bickley makes Waltraute’s tale a tragedy of loss more than a disguised plea for the ring, and Andrew Shore returns his Alberich from Bayreuth with interest.

The whole is topped by a serious and quite dark pair from Sweden. Lars Cleveman is a thinking, tragic Siegfried, well matching his conductor’s conception of the work. His Brünnhilde, Katarina Dalayman, brings a good mixture of soprano and mezzo colours to the role, by turns steely and strong, or touchingly vulnerable. Her Immolation is unusually visionary and clear-sighted.

The recording quality plays to, or has used, the hall and the performance well, accommodating the large full chorus. There is a goodly space around the orchestra, the singers and important solos never sounding artificially engineered. Off- or near-stage perspectives are convincingly realised. This release on the Halle’s own label intriguingly offers the opera on either a single MP3 disc or a five-CD set, making the new performance competitive and immediately tempting as a second-option choice. In any event it’s the most compelling and best-cast Götterdämmerung on disc since Barenboim’s from Bayreuth (10/94).