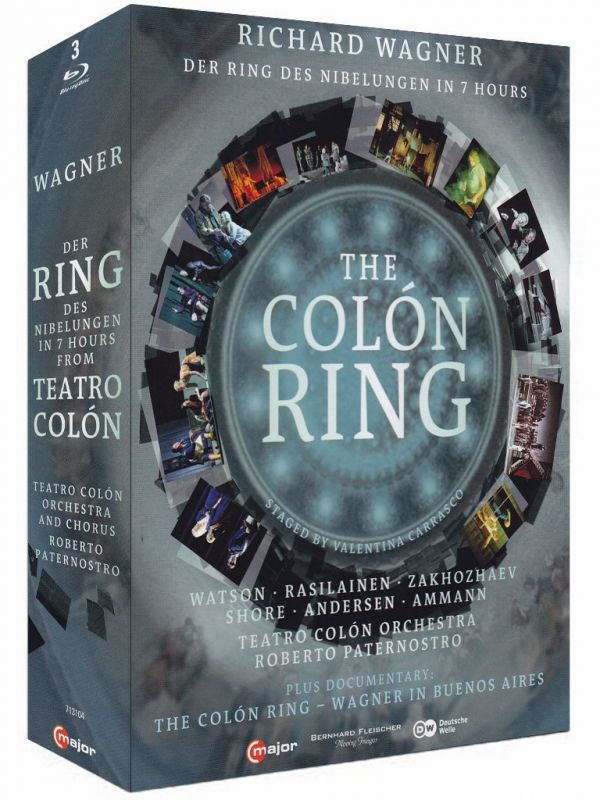 C Major’s performance and ‘making of’ DVDs are the account of an experimental cut version of the Ring cycle given last year in South America’s premium opera house. The four operas were played in a single 12-hour day with a running time of approximately seven hours. Like some other Wagnerian premieres ancient and modern, the event itself was fraught with near-disaster, including the loss of original director Katharina Wagner, the original conductor and some of the cast. But the show went on, saved at the last moment by one of La Fura dels Baus’s director/choreographers, Valentina Carrasco, and the conductor Roberto Paternostro – neither a Ring novice but hampered by having not much more than a month to rehearse. Carrasco’s production made some physical (but little dramaturgical) use of the scenery designed by Frank P Schlössmann for the Wagner team. The ‘making of’ DVD shows the black-and-white of all this with unblushing directness. We see a private film of Wagner’s resignation speech to the cast, Paternostro walking out of an orchestral rehearsal where he considers the playing to be ‘after two weeks’ rehearsal, a farce’, and what Brünnhilde Linda Watson calls the ‘spitfire fireball’ of Carrasco rehearsing.

And the consequence was…the ultimate in curate’s eggs. An original idea (sadly abandoned) was to begin with Die Walküre Act 2 and incorporate the action of that opera’s Act 1 and the whole of Das Rheingold into Wotan’s monologue. Now Rheingold – despite introducing Carrasco’s key idea that the gold equals young children abducted and murdered by the variously fascist regimes of Alberich and a Perónist Wotan – is a musical, visual and dramatic non-event. The ‘cuts’ sound like a 78 needle jumping and the production is keenly over-aware (to put it politely) of recent European predecessors. In Walküre, the musical side of things remains horrible – we’re still talking jump-cuts into bleeding chunks rather than any serious arrangement. Thereafter, Cord Garben’s cuts appear informed by some genuine dramatic purpose and Carrasco’s envisioning of the music onstage becomes sharply more radical and imaginative. Götterdämmerung in particular – with a huge chunk of the action of the end of Act 1 and start of Act 2 taking place in the mind of Daniel Sumegi’s Mafia gangster Hagen – resembles the kind of opera Wagner could have written had he abandoned his olde worlde 1848 libretto. Siegfried too has much potential. Its Act 2 is cunningly preluded by the horn call and the action – spreading over into Act 3’s confrontation with Wotan/Wanderer (his only appearance in this version) – is focused by Carrasco on the hero’s loneliness.

Whereas the Jonathan Dove/Graham Vick reduced Ring made for the Birmingham Opera Company several decades ago has become a much-performed classic, I can’t imagine anyone taking up the Garben version – even with a director as smart as Carrasco and conducting of the quality of Paternostro – without a chunk of dramaturgical work on the first two operas of the cycle. The Colón deserve credit for sticking to their guns and finally fielding such a consistent cast. Sound and vision on these discs are both excellent. Unprissy, adventurous Wagnerians will want to hear and see, if only to argue.