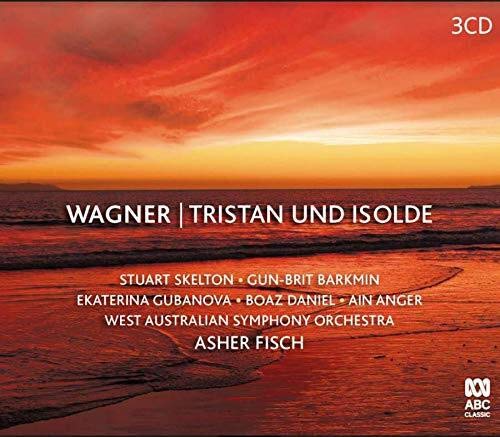 Not just a commemoration of a rare local event, this live concert recording – drawn from two performances and, presumably, rehearsals – is worth preserving, even in a crowded market in which you could now trace, almost unbelievably, over 70 complete recordings.

Let’s start with the relative newcomers to Wagnerian adventure. The orchestra here are special because of their obvious knowledge of, and attention to, the drama of the piece. They play like a pit orchestra rather than a symphony orchestra, always listening, always colouring, creating and then running with Wagner’s emotional temperature. Much of this seems due to their years spent with Asher Fisch, a Barenboim trainee (we might call him without disrespect) who sounds – in this score that he has revisited regularly – as deeply schooled and in tune as his pater profundus.

One word of listeners’ warning: if you are addicted to the deep bass orientation of Wilhelm Furtwängler’s benchmark of a studio recording (now on Warner and several other multi-generation copies), give yourself time to become acclimatised. The orchestra here intentionally sounds lighter and brighter, yet it contributes every bit as tellingly.

Then there’s the Isolde, Gun-Brit Barkmin, called in as a replacement and making apparently her first complete performances of the role. Again, it’s a lighter and more feminine voice than we may have regularly heard elsewhere, but her unravelling of the Irish princess’s complex emotional journey is both clear and complete. And, although she’s pushed at the points where Isoldes normally are (and always will be), she sounds more completely at home here than in last year’s Naxos Götterdämmerung (11/18), with a well-calculated degree of controlled sadness alongside the ecstasy of the Liebestod.

Elsewhere all is (mostly) credit. Skelton is now an experienced Tristan and brings the role back to his home country with an especially fluent and detailed portraying of Act 3. The voice meshes well with his Isolde’s. Daniel, again a lighter voice than you might find, is refreshingly unhysterical as Kurwenal, perhaps lacking the last degree of master/servant edge that you found in Act 3 from such singers as Hans Hotter. Ain Anger is most impassioned in his mighty Act 2 monologue – no longueurs here in another refreshingly new slant to existing performances – and Gubanova, as often before, makes for a sincere and engaged Brangäne.

The recording is most natural although the chorus’s distance away (as per score) might sound strange if you’re used to modern stage productions which all show the chorus at the end of Act 1. This is the only moment of slight vocal unease, as the chorus greeting the landing in Cornwall sound inappropriately churchy and formal.

You should have gathered from the above that there is a continuous and credible newness about this performance. It feels like a first-time adventure to all in the best sense. That is undeniably due to the commitment and input of Asher Fisch on the podium, with a performance that keeps pace and heartbeat – and certainly feels quick compared with, say, Bernstein (C Major DVD, 9/18), Karajan (Warner, 7/88) or Thielemann (DG DVD, 9/16) but is never rushed for the sake of it. Well worth investigating, especially if the Tristans on your shelf are from long-gone decades.