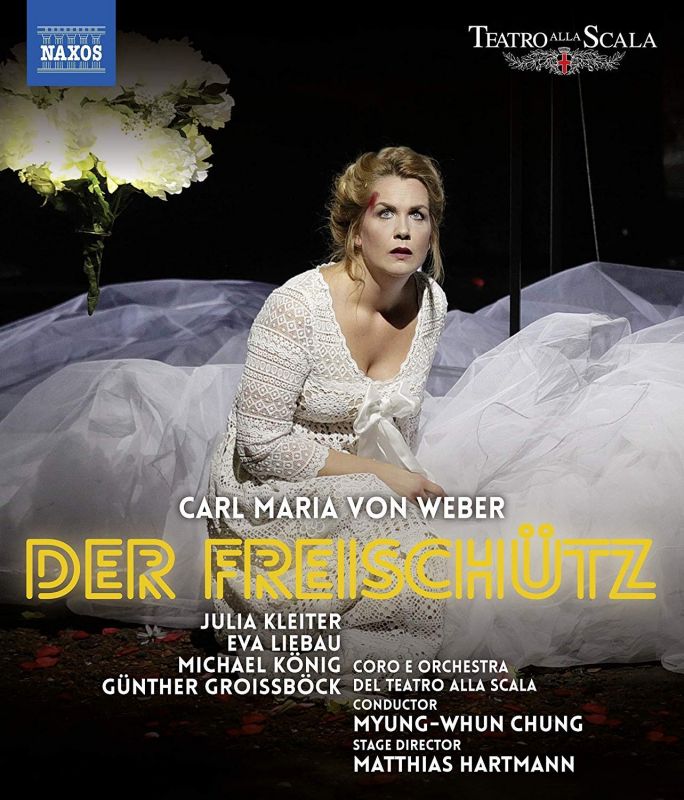 Weber’s Der Freischütz rarely gets productions outside of Germany and Austria, so Matthias Hartmann’s 2017 staging for La Scala, Milan, is welcome. Or at least it would be did it not fall between two stools of what it wants to be. Costumes point to a traditional approach, albeit with outsize hats and a silly bow for Aennchen (making her even more annoying a character than usual), while Raimund Orfeo Voigt’s set features neon tubing to depict buildings. When displayed full screen on this DVD, they flicker distractingly. I do hope this is a camera side-effect and not something that plagued the Milanese audience.

Happily, the opera’s darker scenes are neon-free, with charred trees framing the Wolf’s Glen, where Günther Groissböck’s scar-faced Caspar summons the devil (Samiel, the Black Huntsman) to forge the seven magic bullets on which the plot rests. There are plenty of pyrotechnics here, and red demons writhing in the forest while Myung-Whun Chung fires up the La Scala orchestra to aurally depict the supernatural horrors Max witnesses. Groissböck is the star of the show, his muscular bass perfect for the role of the tortured forester in league with the devil. His black aria ‘Schweig! damit dich niemand warnt’ is tremendously dispatched. Michael König isn’t a natural actor but he has the heft for Max’s aria ‘Durch die Wälder’.

Julia Kleiter is a lovely Agathe, whose hand in marriage is up for grabs in the shooting contest. ‘Leise, leise, fromme Weise’ is gorgeously shaped. Eva Liebau is a lyric soprano Aennchen rather than a pesky coloratura but Hartmann makes her character rather ridiculous, as he does the bridesmaids in the chorus where they bring the bridal wreath (which an imp fireballs to turn into a charred funerary wreath instead).

Chung conducts a clean account that has plenty of drama where it is required, while the villager scenes have bounce and charm. If only the production knew what it wanted.