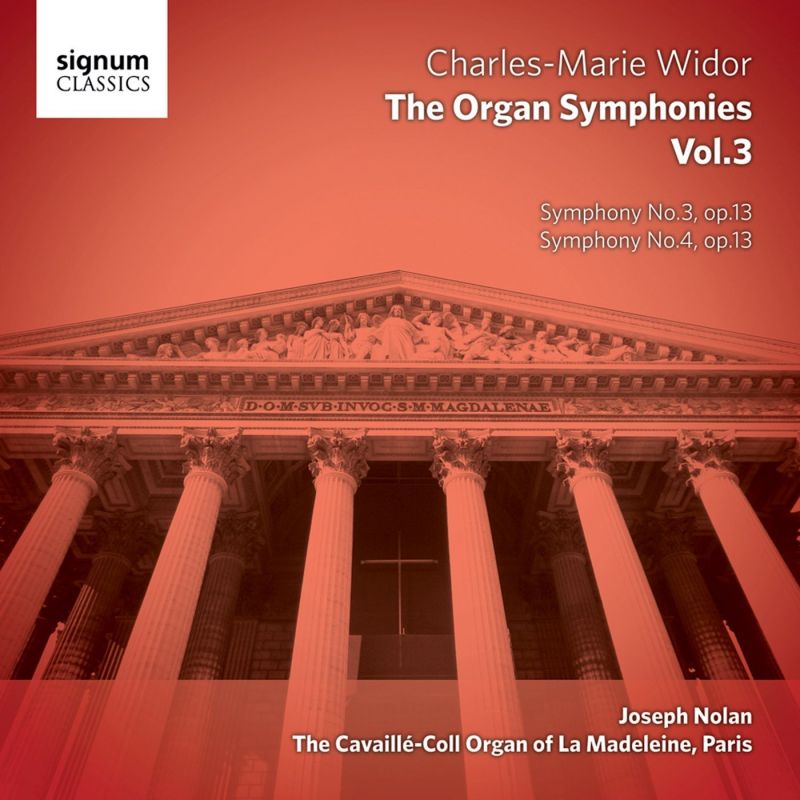 Wading through the assemblage of quotations and oblique references which constitute the booklet-notes for this latest release in Joseph Nolan’s Widor series, we read that ‘Widor’s symphonies need no special pleading’. I beg to differ.

Few organists risk subjecting their public to complete performances of any Widor symphony, preferring to cherry-pick the crowd-pleasing movements (the first and the fifth from the Fifth and the first from the Sixth being by far and away the most popular). Indeed, some of Widor’s non-organ music is better known and more widely performed than many of the organ symphonies. And while several have ventured to commit complete symphonies to disc, few have persuaded us that the venture is really worthwhile.

If anyone can plead the case for Widor’s organ symphonies, that person has to be Joseph Nolan who, tackling here two of the more obscure examples (so obscure, in fact, that the booklet persistently gives the wrong opus number to No 4), almost convinces me that these are coherent architectural wholes rather than a series of unconnected character pieces intended to demonstrate the range of a classic Cavaillé-Coll. It certainly helps that he is playing a genuine Cavaillé-Coll with a truly glorious array of colours and effects (even if it has long since forgotten those first flushes of youth), but what impresses most is Nolan’s marvellous sense of architecture and far-sighted view of these scores.

True, some movements leap out at you and you wonder why they are not better known (where have the enchanting Minuetto from the Third or the Mendelssohnian Scherzo from the Fourth been all my life?) and others cannot hide their deep-seated weaknesses (in a blind-tasting, the bleating Adagio of the Fourth could easily pass as a grim Victorian church voluntary), but Nolan’s strength is that he sails through it all with tremendous authority to end up with an interpretation that makes total musical sense. Add to this the sumptuous sound Signum has captured from La Madeleine and you have a disc which pleads Widor’s case with consummate eloquence.

Symphony for Organ No 3

Symphony for Organ No 4