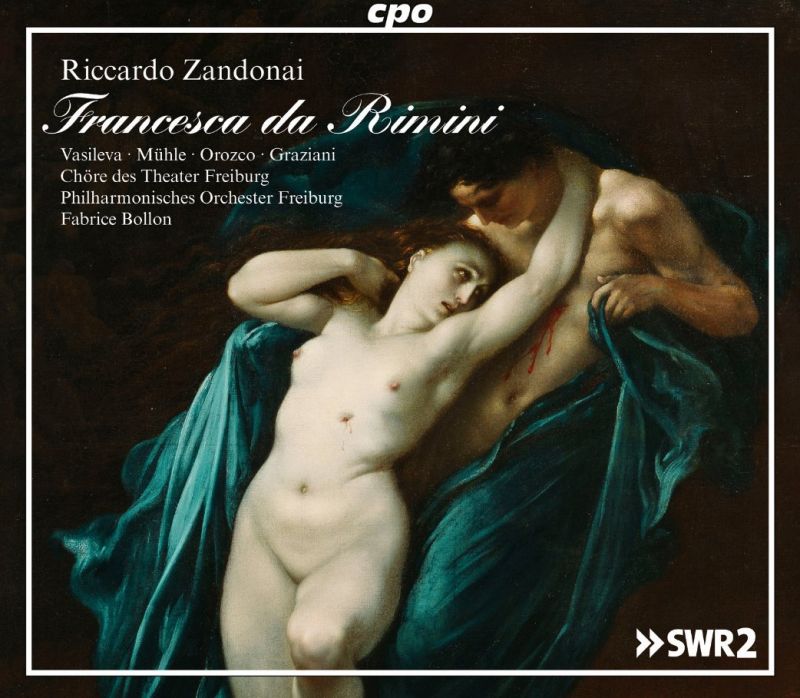 The only work of Riccardo Zandonai’s to maintain a toehold in the repertory, Francesca da Rimini is one of the more interesting of the post-verismo Italian operas that, composed on the eve of the First World War, quickly did the international rounds before sinking into obscurity. A lavish production at the New York Met staged for Scotto and Domingo in the 1980s was very much against the run of play – at least outside of Italy – although it was filmed (and is available on DVD) and revived, with a new cast obviously, in 2013, with the HD broadcast further helping Francesca’scause.

On disc the work has not fared terribly well. Alongside the usual live releases, including a recent Bregenz recording conducted by Fabio Luisi (Koch – nla), from the studio there have been only Decca highlights from Magda Oliviero and Mario del Monaco, an early Cetra set (in scrawny sound, starring Maria Caniglia and Giacinto Prandelli), and an RCA set from the 1980s (with better but still with slightly raw, voice-heavy engineering), starring Raina Kabaivanska and William Matteuzzi under Maurizio Arena.

This new CPO set, the first, as far as I’m aware, to present the score uncut, fills an important gap, giving us a well-engineered modern account of the work and including, as seems now happily to be the company’s default, both libretto and translation. But it’s also an excellent achievement on its own terms. The cast features singers largely active in Germany in general and at Theater Freiburg in particular, and they sing powerfully, reliably and impressively. Christina Vasileva’s soprano is up to the challenge of Francesca. It’s a rich, complex voice, a touch soft-edged where Kabaivanska’s becomes strident, and she makes some luxurious sounds, even if those sounds thin out a little at the top; she admittedly doesn’t do what she might with the words, but the characterisation, though generalised, is nevertheless convincing.

Martin Mühle as her lover Paolo is rock solid, the voice occasionally reminiscent of del Monaco – and the slightly stentorian delivery, too. But he delivers a fine, handsome and robust performance. Juan Orozco sings with suitably unstinting menace as Gianciotto (Paolo’s lame brother) and Adriano Graziani with threatening, insinuating bite as Malatestino (the one with one eye), and there’s not a weak link among the rest of the quite large cast, with Viktória Mester’s rich-voiced Smaragdi especially fine. (It should be noted that CPO’s booklet could be clearer regarding the characters, with some confusion between libretto and cast list).

Fabrice Bollon conducts the score with a sure touch and is particularly adept at bringing out its moments of beauty – some of them, such as the dreamy orchestral and choral postlude to the first act, offering a breathtaking mixture of Wagnerian atmosphere and, with Zandonai’s onstage use of a plangent viola pomposa and lute, neo-Renaissance colour. When reviewing the earlier RCA set, Michael Oliver noted that the work pits such ravishing moments against those of unappealing brutality. That dichotomy is still apparent here, and Bollon can’t hide some of the score’s more galumphing, militaristic character, but under his direction it feels less jarring, with both the orchestral playing and CPO’s engineering – still voice-orientated but not overbearingly so, and well-blended – offering real refinement.

The piece therefore comes across as more sophisticated and economical than elsewhere, an escape into the heightened psychological reality and symbolism of Gabriele D’Annunzio, on whose play Tito Ricordi’s libretto was based. And while there are explicit references to the story of Tristan and Isolde in the text, the score has more of the heavy fatalism and occasional brutality of Götterdämmerung and often also brings Gurrelieder to mind (although Schoenberg’s work was premiered only a year before Zandonai’s). Francesca’s final scene, meanwhile, shares a beautiful calm-before-the storm colour with Desdemona’s (although, of course, Verdi’s heroine is somewhat more blameless).

It’s a fascinating and seductive work, then, and one that finally receives the advocacy it deserves with this excellent recording. Do give it a go.