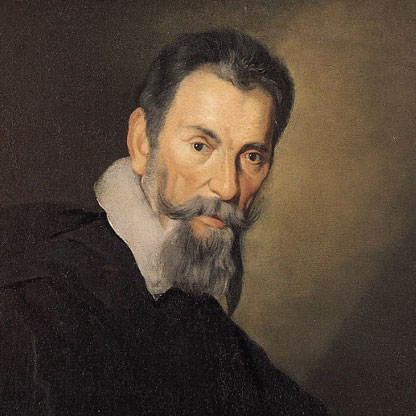 Monteverdi can be justly considered one of the most powerful figures in the history of music. Among his most notable works are the operas Orfeo and L’incoronazione di Poppea, and one of the greatest of all sacred pieces, the 1610 Vespers.

David Vickers speaks to Andrew Parrott on the 40th anniversary of the Taverner Consort and Players... Read more

Monteverdi's Combattimento – which recording should you buy?

Monteverdi's Vespers – which recording is best?

Monteverdi studied with Ingegneri, maestro di cappella at Cremona Cathedral, and published several books of motets and madrigals before going to Mantua in about 1591 to serve as a string player at the court of Duke Vincenzo Gonzaga. There he came under the influence of Giaches de Wert, whom he failed to succeed as maestro di cappella in 1596. In 1599 he married Claudia de Cattaneis, a court singer, who bore him three children, and two years later he was appointed maestro di cappella on Pallavicino’s death. Largely as the result of a prolonged controversy with the theorist GM Artusi, Monteverdi became known as a leading exponent of the modern approach to harmony and text expression. In 1607 his first opera, Orfeo, was produced in Mantua, followed in 1608 by Arianna. The dedication to Pope Paul V of a grand collection of church music known as the Vespers (1610) indicated an outward-looking ambition, and in 1613 Monteverdi was appointed maestro di cappella at St Mark’s, Venice.

There Monteverdi was active in reorganising and improving the cappella as well as writing music for it, but he was also able to accept commissions from elsewhere, including some from Mantua, for example the ballet Tirsi e Clori (1616) and an opera, La finta pazza Licori (1627, not performed, now lost). He seems to have been less active after c1629 but he was again in demand as an opera composer on the opening of public opera houses in Venice from 1637. In 1640 Arianna was revived, and in the following two years Il ritorno d’Ulisse in patria, Le nozze ­d’Enea con Lavinia (lost) and L’incoronazione di Poppea were given first performances. In 1643 he visited Cremona and died shortly after his return to Venice.

Monteverdi can be justly considered one of the most powerful figures in the history of music. Much of his development as a composer may be observed in the eight books of secular madrigals published between 1587 and 1638. The early books show his indebtedness to Marenzio in particular; the final one, Madrigali guerrieri et amorosi, includes some pieces ‘in genere rappresentativo’ – Il ballo delle ingrate, Il combattimento di Tancredi e Clorinda and the Lamento della ninfa – which draw on Monteverdi’s experience as an opera composer. A ninth book was issued posthumously in 1651.

Orfeo was the first opera to reveal the potential of this then novel genre; Arianna (of which only the famous Lament survives) may well have been responsible for its survival. Monteverdi’s last opera, L’incoronazione di Poppea, though transmitted in not wholly reliable sources and including music by other men, is his greatest masterpiece and arguably the finest opera of the century. In the 1610 collection of sacred music, Monteverdi displayed the multiplicity of styles that characterise this part of his output. The Mass is a monument of the prima prattica or old style. At the other extreme, the motets, written for virtuoso singers, are the most thoroughgoing exhibition of the modern style and the seconda prattica.