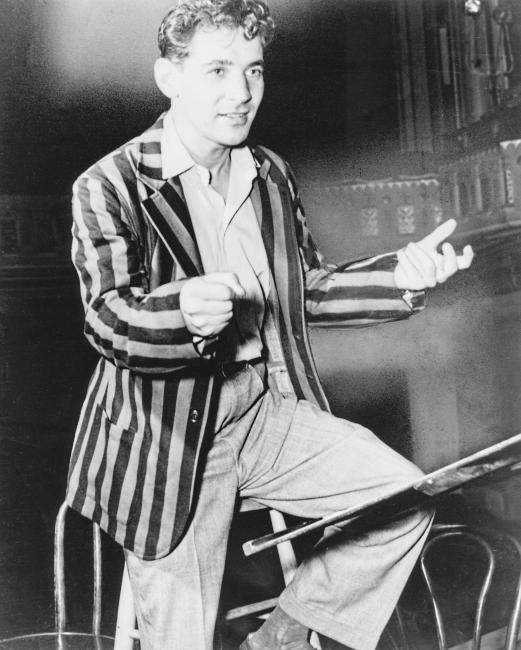 Like no other musician of his age, Bernstein was able to straddle the extremes of the musical world – an intellectual, a composer who wrote complex symphonies and 12-tone music but who was equally happy playing piano and writing Broadway musicals, able to take his adoring public with him down most of the roads he chose to travel.

‘One-man bridge’ would be an appropriate description for Bernstein. Like no other musician of his age, he was able to straddle the extremes of the musical world – an intellectual, a composer who wrote complex symphonies and 12-tone music but who was equally happy playing piano and writing Broadway musicals, able to take his adoring public with him down most of the roads he chose to travel. His appetite for music and his zest for life, his passion to share his enthusiasms, his versatility and boundless energy leave one breathless. As conductor, composer, educator and pianist, ‘Lenny’ dominated American musical life for four decades.

He was actually born Louis, the son of Russian-Jewish immigrants, but changed his name by deed poll aged 16 to avoid confusion with other Louis Bernsteins in the family. He had private piano lessons as a child before going to Harvard University where began a succession of distinguished mentors who oversaw the development of a prodigious talent – Walter Piston and Edward Burlingame Hill for counterpoint, fugue and orchestration, followed, at the Curtis Institute, by Fritz Reiner for conducting and Isabella Vengerova for piano. Scholarships enabled him to attend courses in 1940 and 1941 at Tanglewood, Massachusetts, where he studied under the great conductor, publisher and patron Serge Koussevitzky.

Bernstein became Koussevitzky’s protégé, his assistant at Tanglewood, before being made assistant to the legendary Artur Rodzinski at the New York Philharmonic. Fairy-tale stuff – and better was to come. In November 1943 he was called upon at very short notice to take over a difficult concert for the indisposed Bruno Walter. Rodzinski was out of town and the young Bernstein scored a huge personal triumph. Overnight he was famous and the occasion gave a kick-start to one of the most brilliant conducting careers in American history, crowned by being made conductor of the New York Philharmonic in 1958 and, on resigning in 1969 to give more time to composition, ‘conductor laureate’. His animal energy on the podium was compulsive. In concerts and books, on radio and television, Bernstein was the supreme communicator and the Young People’s Concerts he presented from 1958 to 1973 must have introduced millions to the music he so obviously loved.

Bernstein seemed to need little time before discovering his own distinctive voice of strongly lyrical, jazz-slanted music full of his Jewish heritage. The 1940s and ’50s saw the appearance of a bewildering variety of musical works in all shapes and forms including his Symphonies Nos 1 and 2, Clarinet Sonata, Prelude, Fugue and Riffs, his film score for On the Waterfront (1954) as well as a Broadway career. This came as a result of his 1944 ballet Fancy Free which was subsequently adapted into the musical comedy On the Town; that in turn led to another (Wonderful Town) and then, most spectacularly, to West Side Story. Less commercially successful but with interesting and delightful scores were the comedy operetta Candide and the one-act opera Trouble in Tahiti (Bernstein supplying his own text – his other writing talents included poetry and he published a number of sonnets and other poems). In the ’60s came a series of religious works – his Symphony No 3 (Kaddish), the Chichester Psalms (commissioned by the Dean of Chichester and first performed in 1965) and Mass (written for the opening of the John F Kennedy Center for the Performing Arts in Washington, DC, in 1971).

He married Chilean actress Felicia Montealagre in 1951 (she died in 1978) but Bernstein’s sexual drive was devoted mainly to members of his own sex. One young man was due to go to America to study with Bernstein. ‘Be careful,’ his father warned. ‘Leonard Bernstein is gay.’ The young man looked up in wonder. ‘Is there nothing that man can’t do?’ he said in admiration.