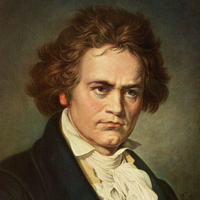 ‘There are and there will be thousands of princes,’ wrote Beethoven to Prince Lichnowsky. ‘There is only one Beethoven.’ People approach Beethoven with a feeling of awe and reverence. Whether you like his music or not, it is an appropriate response for his achievements make him one of the supreme creative geniuses of history, up there with Leonardo, Michelangelo and Shakespeare (in fact someone once said that ‘where Shakespeare ends, Beethoven begins’). In one short burst he dragged music from the Classicism of the 18th century into the Romantic era, which dominated musical thinking for 100 years. What he did was genuinely courageous: his single-minded vision, idealism, determination and personal bravery are indeed awe-inspiring.

Beethoven was convinced that the ‘van’ in his name indicated noble birth and he allowed the rumour to circulate that he was the love-child of Friedrich Wilhelm II (or even – and more improbably – Frederick the Great). In fact his family was of Dutch descent. His grandfather had been a choir director in Louvain.

Beethoven had a thoroughly miserable childhood thanks to his alcoholic brute of a father (a singer in the Electoral Chapel in Bonn). Fired by ambitions to turn his gifted son into a second Mozart, Johann van Beethoven would keep him slaving at the piano all night, raining blows on him when he made a mistake. Young Ludwig was an unprepossessing-looking child, he had no friends, he was clumsy and untidy in appearance and the only warmth he knew came from his mother. Johann and his fellow drinker Tobias Pfeiffer were his first teachers; various others contributed to his early musical study of the violin, organ, piano and horn. His first work to be published was Nine Variations for piano on a March of Dressler which he composed when he was 12. His first important lessons came from the court organist Christian Neefe who recognised and nurtured Beethoven’s talent. At 14, the Elector Maximilian made him deputy court organist.

First steps as a professional musician

While on a visit to Bonn, Beethoven’s mother died. His father’s alcoholism cost him his job, obliging Beethoven to earn enough money to keep the family (he had two younger brothers). This he did by playing the viola in a theatre orchestra and giving piano lessons to the wealthy widow of a court councillor. Among the influential admirers he met at this time was Count Ferdinand Waldstein, later immortalised by the dedication of one of Beethoven’s sonatas.

In 1792 he studied briefly and unprofitably with Haydn in Vienna (which became his home for the rest of his life) before lessons in counterpoint from Albrechtsberger and vocal composition with Salieri. Haydn, it must be said, though as intolerant of Beethoven’s crude manners as he was of his disregard for the normal rules of harmony, was moved to remark that Beethoven made the impression of  ‘a man who has several heads, several hearts and several souls’.

In 1795 Beethoven made his debut in Vienna and his reputation as a virtuoso pianist and composer spread rapidly. Though it remained a secret between his doctor and himself for many years, we know that Beethoven was aware of impending deafness as early as his 26th year – otosclerosis was certainly part of the cause (an abnormal growth of honeycomb bone in the inner ear) accompanied by tinnitus, but a contributory factor was syphilis, the symptoms of which show up in the life mask made in 1812 and in the photograph taken of his skull in 1863 when the body was exhumed.

In a document dated 1802 and not discovered till after his death, Beethoven wrote poignantly of his condition, aware that the most important sense to him, that of hearing, was going to be taken away. This is the so-called Heiligenstadt Testament, written in the village of Heiligenstadt near Vienna.

His predicament spurred him to a furious spell of creativity and, in the circumstances, it is quite remarkable that he was able to compose such music – of every shape and form, embracing tragedy and joy – without apparent reference to his physical state (‘coolness under the fire of creative fantasy’ was how Schubert summed up Beethoven’s genius). During this period he presented his Third Piano Concerto and the Kreutzer Sonata, his oratorio Christus am Oelberge, the Waldstein, Appassionata and Moonlight Sonatas as well as his Symphony No 3 (the Eroica).

And still the music came pouring out: the first version of Fidelio was given in 1805, followed by the Razumovsky string quartets, Symphonies Nos 4, 5 and 6, the Violin Concerto, the Triple Concerto and a number of piano sonatas. Beethoven was offered the well-paid position of Kapellmeister of Kassel by King Jerome Bonaparte of Westphalia but, despite his financial difficulties (his income from various patrons was uncertain), he decided to stay in Vienna.

The inexorable progress of Beethoven’s deafness made him increasingly irritable, over-sensitive, scornful and petulant, more inclined to retreat into himself and shun society. He exaggerated his poverty (he kept his shares and bonds locked up in a secret drawer) and assiduously studied the winning numbers in the Austrian national lottery in the hope of making a fortune. Beethoven was also irredeemably untidy – his handwriting was all but indecipherable – and many manuscripts bear the circle made by using them as a cover for his soup or chamber pot. But his belief in himself and what he was doing was intense and woe betide anyone who didn’t acknowledge that. Many close friends were banished for ever for trifling incidents; others believed in him and supported him unsparingly: Prince Lobkowitz, Countess Erdödy, for instance, and (especially) the Archduke Rudolph – all tolerated his foibles and stuck loyally by him. Beethoven knew that he was breaking new ground. ‘With whom need I be afraid of measuring my strength?’ he once boasted proudly. To prove it, one masterpiece followed another – the Fifth Piano Concerto (the Emperor), Symphonies Nos 7 and 8, the Les adieux Piano Sonata.

The great works of a mature artist

The years 1812 to 1817 saw a marked decline in the amount of music and in its adventurousness. This led to the third and final phase of his development as a composer beginning in 1818 – and with a vengeance! It saw the appearance of the mammoth Hammerklavier Piano Sonata and it heralded the beginning of arguably his greatest and most productive period, the one which brought the Ninth (Choral) Symphony, the Missa solemnis and the late string quartets. During this decade, deprived of a wife and family, Beethoven sought to find a surrogate son in the form of his nephew Karl, whose father died in 1815. He regarded Karl’s mother as unfit to bring up the boy and engaged in a series of sordid and bitter court quarrels in an attempt to become his guardian. He finally won the case in 1820 and for the next six years stifled him with avuncular affection in a pathetic attempt to gain his love and reform Karl’s dissolute ways. Karl, in return, piled up enormous debts, regarded his uncle with some contempt and finally attempted to commit suicide. At length, he joined the army and went on to enjoy a normal life.

Beethoven was totally deaf after 1818. Just as those who have never fought in a war can never properly conceive its true terrors, so we can never imagine what deafness can have been like for one of the greatest composers of history. His touching faith in every new ‘hearing remedy’ that came on the market bears witness to his undying hope for a cure. His only means of conversation with his fellow men was through conversation books – everything that anybody wanted to say to Beethoven was written down first (he would answer orally). The most heart-rending demonstration of his affliction is the famous occasion of the premiere of the Ninth Symphony in May 1824, which the composer insisted on conducting himself, though stone deaf. It’s said that as the Symphony ended, Beethoven was several bars adrift from the orchestra and chorus and continued to conduct even as a storm of enthusiastic applause broke out. The contralto soloist, Caroline Ungher, at length came over to him, and gently turned him round to face the audience. Only then did the audience realise that Beethoven had not heard anything that had been going on and, wrote Sir George Grove, ‘[it] acted like an electric shock on all present. A volcanic explosion of sympathy and admiration followed which was repeated again and again and again and seemed as if it would never end’. There must have been a few tears shed that night.

In 1826 Beethoven caught a cold while visiting his brother; the cold developed into pneumonia; jaundice and dropsy set in after that. His death on the afternoon of March 26 came in the middle of a violent thunderstorm, a coincidence which has appealed to the more romantically inclined biographers. In fact, there was an electrical storm over Vienna that day but the other legend, that of the dying Beethoven raising his fists to Heaven in a last defiant gesture, must be a fanciful invention considering his feeble physical state. His last words were reported to have been: ‘I shall hear in Heaven.’ For his funeral, schools closed, people stayed away from work and all Vienna mourned. Franz Schubert was one of the torch-bearers.

‘The first of Beethoven’s compositions are music,’ wrote the critic Eduard Hanslick. ‘In his last compositions Beethoven makes music.’  There is a direct parallel between the political climate of the time and Beethoven’s music. Just as the French Revolution overthrew established authority and spread a wave of rebellion throughout Europe, so Beethoven with equal defiance and decisiveness overthrew accepted musical form, traditional harmony and structure and the neat, well-ordered ways of the so-recent worlds of Haydn and Mozart. Beethoven’s credo was the entirely new one expressed in the writings of the philosophers of the Enlightenment such as Rousseau and Voltaire: the creative ego has the right to express itself in its own way without fear or hindrance. As a devout republican, Beethoven (and indeed his music) shouts from the rooftops, ‘I, too, am King!’

The complete guide to Beethoven's Symphonies 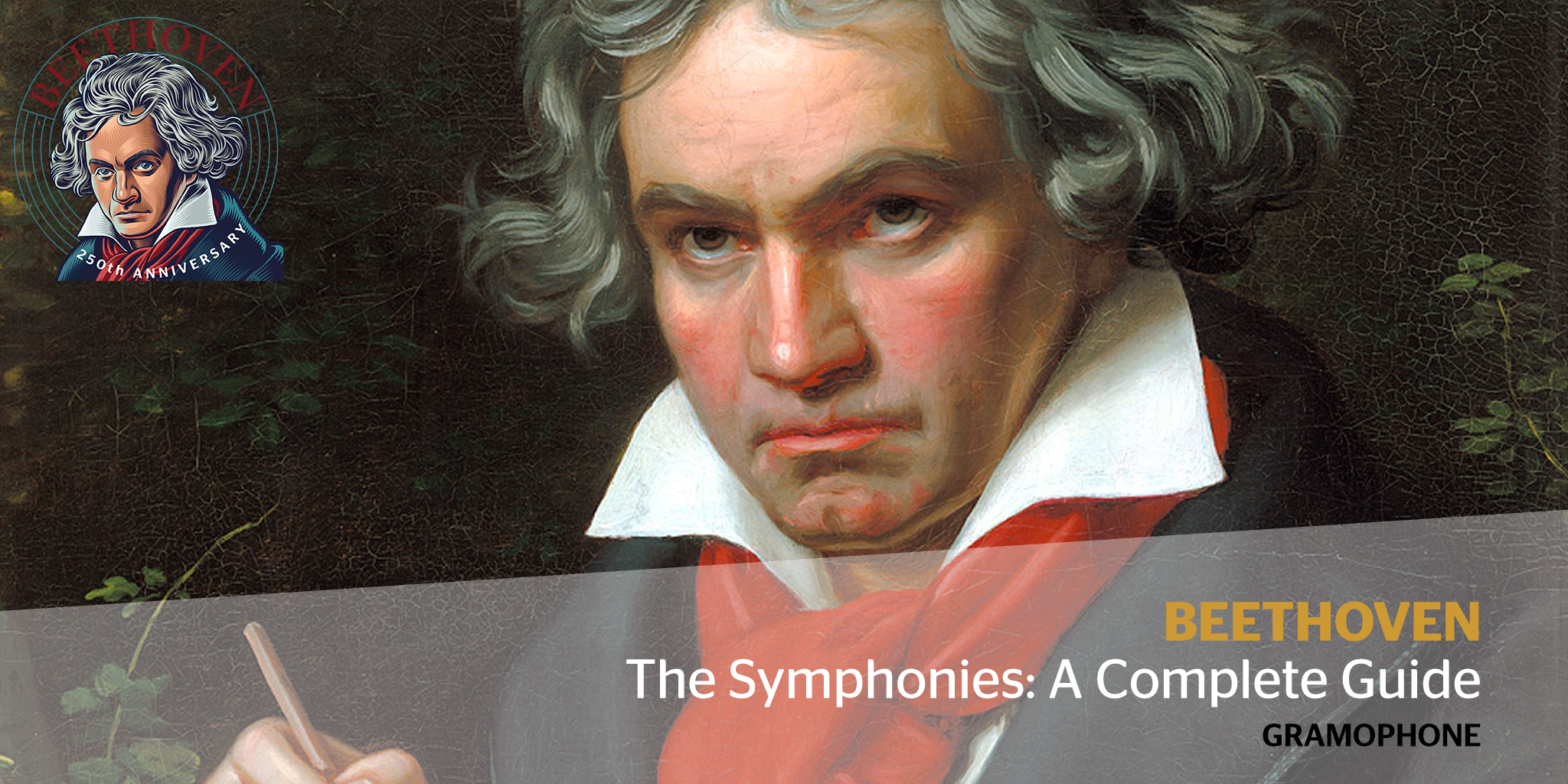 How Beethoven's symphonies changed the world

Richard Wigmore speaks to some of the world's leading Beethoven conductors to understand why his music is as relevant and important today as it was 200 years ago... Read more

A guide to the best recordings of Beethoven's Symphony No 3, 'Eroica'

The Third Symphony is both great music and a force beyond music. How, asks Richard Osborne, have conductors met this challenge during the work’s 90-year-long recorded history?... Read more

Complete with the original Gramophone reviews of 50 of the finest Beethoven recordings available... Read more