In 2014, Guy Rickards surveyed the achievements of this great exponent of the composer-pianist tradition on the eve of his 75th birthday. 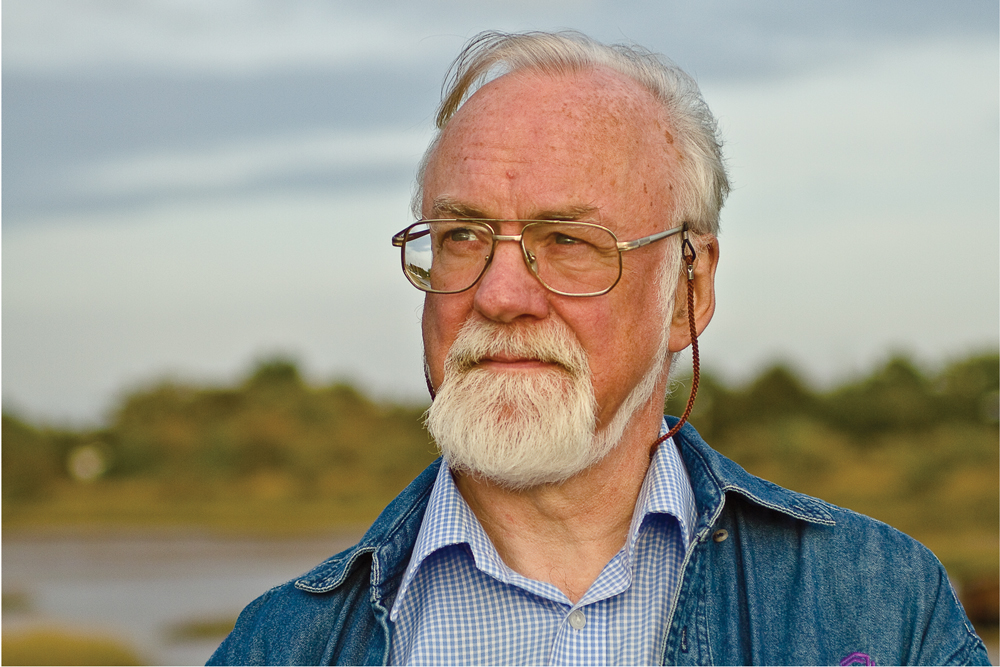 There are very few musicians like John McCabe, who celebrates his 75th birthday in April. One of Britain’s finest composers in the past half-century, his prolific output covers every major genre bar grand opera (although he has written operas for children – The Lion, the Witch and the Wardrobe, 1968 – and chamber forces – The Play of Mother Courage, after Grimmelshausen, 1974). These genres include seven orchestral symphonies (1964-2007; plus two others for solo organ and wind ensemble), seven string quartets  (1960-2012), 13 sizeable studies for piano (1969-2011) and 26 concertos or concertante pieces for most of the standard orchestral instruments, as well as the concertos for chamber orchestra, and the acclaimed Concerto for Orchestra premiered by Solti in 1984. His musical style is highly individual, based on a mix of Vaughan Williams, Britten and Tippett leavened with Karl Amadeus Hartmann and serial procedures – although his writing has always been tonal.

Yet McCabe has, at times, been even better known as a pianist of formidable gifts and wide-ranging sympathies with a repertoire extending from the contemporary to the pre-Classical. His recordings have garnered much acclaim, most notably the mid-1970s series for Decca of the complete Haydn piano sonatas, hailed in these pages as ‘one of the great recorded monuments of the keyboard repertoire’ (12/95). His recordings also cover works by contemporaries and friends such as his former composition teacher Thomas Pitfield, Rawsthorne, Joubert, David Ellis, Casken, Saxton, John Adams and William Schuman, as well as Bax (violinsonatas with Erich Gruenberg and the piano sonata original of the First Symphony), Grieg, Hindemith and – in duet with Tamami Honma – Britten, McPhee and Stravinsky’s Agon. His CV includes lecture-recitals on Webern’s Piano Variations and the UK premiere of Corigliano’s Piano Concerto, but also includes guides on Bartók, Haydn and Rachmaninov and a book-length study of Rawsthorne. While never a teacher per se, McCabe was pianist-in-residence at Cardiff University (1965-8), visiting professor at Melbourne and Cincinnati Universities for short spells in the 1990s and the principal of the London College of Music (1983-90)in succession to William Lloyd Webber with whose son, Julian, McCabe made several recordings.

The range of these activities and his formidable abilities as a pianist often overshadowed McCabe the composer early on, despite notable premieres: the First Symphony, Elegy, under Barbirolli at the 1966 Cheltenham Festival, the sonically ravishing song-cycle Notturni ed Alba at the 1970 Three Choirs Festival, The Chagall Windows (the subject of a 1975 Granada TV documentary) or the Concerto for Orchestra. This periodic oscillation of the public’s perception of him – as pianist or composer, but rarely both together – finally settled to that of composer foremost following the Stuttgart premiere in 1995 of his third ballet Edward II, and, more significantly, its revival a couple of years later and subsequent tour by Birmingham Royal Ballet. McCabe’s score (running for almost two hours) for David Bintley’s choreography based on Marlowe’s play is remarkable for fusing music conceived symphonically with a choreographic scenario. Although key passages were extracted for the brilliant Fifth (1997) of his seven symphonies, the full score compels attention away from the stage action – which in the theatre it both underlines and counterpoints with extraordinary dramatic power.

‘His style is highly individual, based on a mix of Vaughan Williams, Britten and Tippett leavened with Hartmann’

Running unevenly through his output is a series of stand-alone, Alkan-sized studies for piano, starting with a cluster of four: Capriccio and Sostenuto in 1969, and Gaudí (inspired by various influences, including Stockhausen – although very un-Stockhausen-like in result – as well as the great Catalan architect) and Aubade the following year. Two more, Paraphrase on Mary, Queen of Scots (derived from McCabe’s ballet score) and Mosaic (dedicated to William Mathias) were added in 1979-80 but only in 2000 did he return to the series, producing seven more in the following decade. In each of  the later studies, the starting point has been at least in part a homage to, and sometimes a partial reworking of a work by, an earlier keyboard composer: first Dukas (Evening Harmonies, 2000) and Domenico Scarlatti (Scrunch, 2001), followed by Debussy (Snowfall in Winter, 2003), Ravel (Tunstall Chimes, 2004), Mussorgsky (Epithalamium, 2006) and – surprise, surprise – a sonata in homage to Tippett in 2009, premiered in August of the same year by Ashley Wass. That Sonata/Study No 12 stands, therefore, as a work of culmination in McCabe’s piano output – looking back to one of the key influences of his early orchestral style, its highly unified single movement structure the apex of a lifetime’s experience of organic musical development. Since then, a 13th Study, Berceuse, has appeared without any acknowledged reference.

As McCabe slowly makes a recovery from a brain tumour – during which he has composed the exuberant orchestral opener Joybox; he is also, at the time of writing, composing  a trumpet sonata – let us hope that a 14th study, eighth symphony and string quartet, and concertos for the ‘missing’ orchestral instruments (bassoon, trombone, tuba and double bass) flow from his pen.

Edward II stands at the centre of McCabe’s ballet works, preceded by The Teachings of Don Juan (1973) and Mary, Queen of Scots (1974-5) – ignoring productions made from Notturni ed Alba, the Second Symphony (1970-1) and The Chagall Windows – and succeeded by the diptych Arthur (1998-2000), also to choreography by Bintley for the Birmingham company, after which McCabe remarked that he was ‘all pas de deuxed out’. Even so, Edward II has proved a useful reservoir for a number of independent concert works, from the eponymous Symphony No 5 to the Two Scenes for two pianos, the clarinet trio Fauvel’s Rondeaux (1996, written for the Verdehr Trio) and the fine, if dark Cello Sonata (1999).

Coeval with Edward II were two other compositions, the success of which reinforced McCabe’s position as composer rather than performer, a touch ironically in the case of the piano fantasy Tenebrae (1992-3), written for Barry Douglas although McCabe’s atmospheric interpretation subsequently appeared on the composer’s own ‘Farewell Recital’ (Toccata Classics, 2011). Inspired by the opening of Hermann Broch’s The Death of Virgil, which portrays the arrival of the dying Roman poet at Brundusium, the piano fantasy Tenebrae (1992-3) is a darkly compelling meditation on mortality, marking the passing of three close friends: the conductor Sir Charles Groves and composers William Mathias and Stephen Oliver. Pianistically, it is a difficult work to perform – even more so than the wonderful Haydn Variations (1983), still McCabe’s largest solo piano piece – with quasi-orchestral markings in places.

The other composition completed around the time of Edward II was the Fourth Symphony, Of Time and the River (1993-4), named after Thomas Wolfe’s famous novel and  the last to be numbered by McCabe, although he has subsequently withdrawn the number). It’s a brilliantly involving study in contrasting and overlapping tempi that traverses the tonal spectrum from D to A flat and back again. In parallel, the vigorous opening section gradually unravels and decelerates to the moment of silence and stasis separating its two movements. Little by little, the second span, as it inches away from A flat, picks up speed until, a third of the way through, tempo future and tempo past (to misquote Eliot) collide in a chiming episode built from upward- and downward-thrusting music. The path to the recapitulation of the opening section in D has the inevitability of the best symphonic writing but McCabe sidesteps expectations with a tiny coda in A flat as if posing a final, unanswerable question. Sadly, we still await the recording of all seven symphonies. 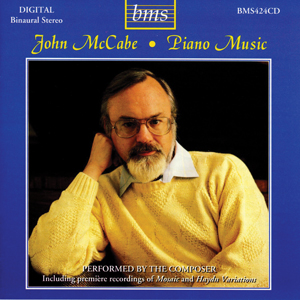 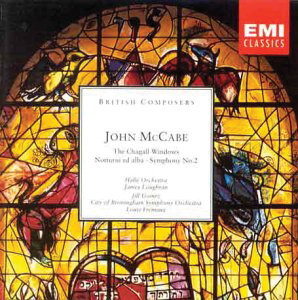 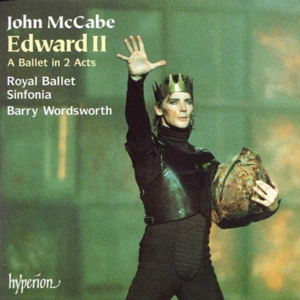 This article originally appeared in the March 2014 issue of Gramophone