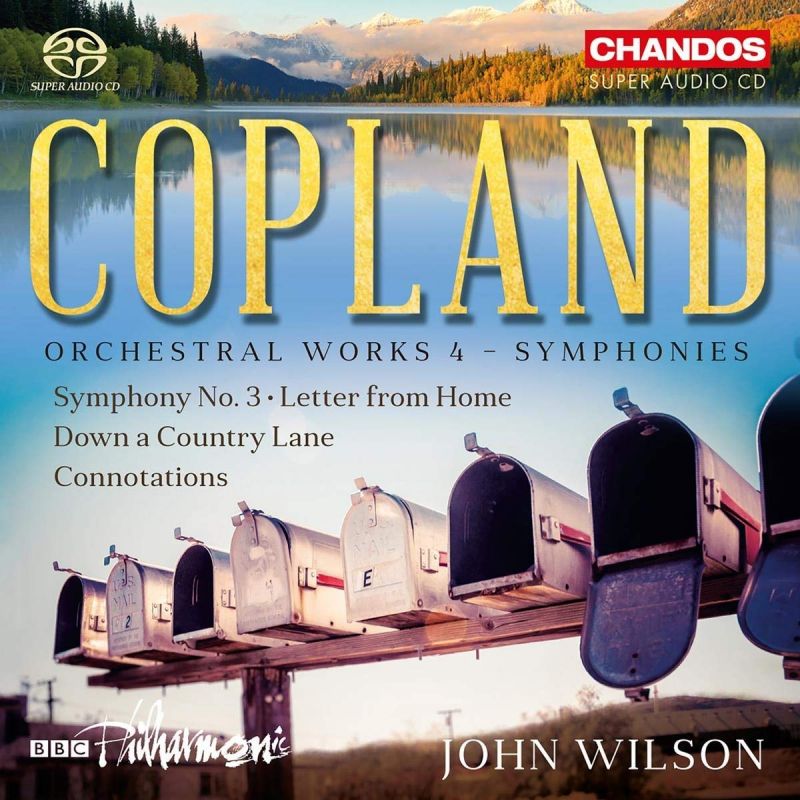 Whether or not Copland’s Third is ‘The Great American Symphony’, it’s definitely a tough nut to crack. Even Leonard Slatkin, whose RCA account provided a persuasively lyrical alternative to the tough resilience of Bernstein’s benchmark recordings, couldn’t maintain a consistent grip in his lumbering remake for Naxos. John Wilson isn’t anywhere near as leisurely as Slatkin but his performance is similarly lacking in urgency and grit. In fact, Wilson’s tempos tend to be faster than Bernstein’s, hewing closer to Copland’s own in his 1958 LSO recording for Everest.

Sonically, the Chandos recording has enormous impact. The bass drum packs a wallop and the atmospheric clarity in delicate passages is dazzling – listen at 5'20" in the central part of the scherzo-like second movement. But the interpretation itself is too soft-grained and often oddly tentative. Why are the music’s seams so audibly exposed in the opening of that second movement, for example, and where’s the molto espressivo in the violins’ aching line at 6'38" in the first? The violins don’t sound secure in the high-lying passage that opens the third movement, either, nor do they attack the vigoroso passage at 6'02" with sufficient verve.

Wilson and the orchestra are far more successful in Connotations, one of Copland’s gnarliest works, composed for the opening of Philharmonic (now David Geffen) Hall at New York’s Lincoln Center in 1962. Here, there’s urgency and rhythmic vitality in abundance, yet the interpretation as a whole is more refined and varied than Bernstein’s (available to download – Sony, 8/73). I find deep sadness in the searching passage at 3'11", dewy idealism at 11'10" and even a hint of real tragedy at 15'50". Some parts do still seem to meander, but I believe that’s the composer’s fault, and Wilson’s performance is the most compelling and imaginative we’ve had yet.

The two miniatures arranged for chamber orchestra – Letter from Home (1944), originally composed for Paul Whiteman’s band, and Down a Country Lane (1962), originally for piano – are attractive in a homespun way, and played here with poise and affection.

Down a Country Lane

Copland Billy the Kid; Symphony No 3