Had Bernard Haitink not conducted another note after stepping down as Principal Conductor of Amsterdam’s Concertgebouw Orchestra in 1988, his position as one of the world’s great conductors would have been secure enough. But he went on to add two more ‘panels’ to a career that has neatly fallen into a kind of triptych: an operatic period and then a final, glorious Indian Summer that shows no sign of drawing to a close.

Haitink was born in Amsterdam where he studied the violin and conducting at the Conservatory; he made his conducting debut with the Netherlands Radio Philharmonic in 1954 and the following year, stepping in for an indisposed Carlo Maria Giulini, first conducted the Concertgebouw Orchestra. In 1959, following the death of Eduard van Beinum, he was named First Conductor of the orchestra: he was 30. Two years later he shared the title of Principal Conductor with Eugen Jochum and then, in 1963, became the Orchestra’s sole Musical Director. For the next 25 years he would develop one of those celebrated conductor-orchestra relationships that was, thankfully, enshrined on disc, largely by Philips. At the heart of a large and wide-ranging repertoire sat the great central works of the Austro-German literature.

Symphonies by Beethoven, Brahms, Schumann and Tchaikovsky followed, and Haitink also proved a superb concerto partner. He conducted the Beethoven piano concertos for Claudio Arrau, Murray Perahia (taking a Gramophone Concerto Award in 1986 for Nos 3 and 4) and András Schiff (with the Staatskapelle Dresden). When Haitink embraced French repertoire the results were, unsurprisingly, ravishing and a recording that included Debussy’s Jeux and Nocturnes brought him two Gramophone Awards – Orchestral and Engineering – in 1980. As Principal Conductor of the London Philharmonic from 1967 to ’79, he gave us Shostakovich symphonies and also proved himself a fine advocate of British composers such as Elgar, Walton and Vaughan Williams.

The late 1970s saw his first major engagement with opera: first at Glyndebourne (1978-88) and then, after Amsterdam, at the ROH (1987-2002) where his repertoire ranged from Mozart to Wagner. His 1983 Don Giovanni, with Thomas Allen in the title-role and based on performances at Glyndebourne, took the 1985 Gramophone Opera Award. Also for EMI, he recorded Wagner and Strauss.

The third period saw him taking on two major positions: as Chief Conductor of the Staatskapelle Dresden (2002-4) and Principal Conductor of the Chicago Symphony (2006-10). Since then he has developed close relationships with the London Symphony Orchestra and the Chamber Orchestra of Europe.

As the Grand Old Man of the conducting world, his love for the music remains palpable and we’re delighted to honour him with this special award. 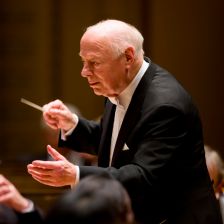