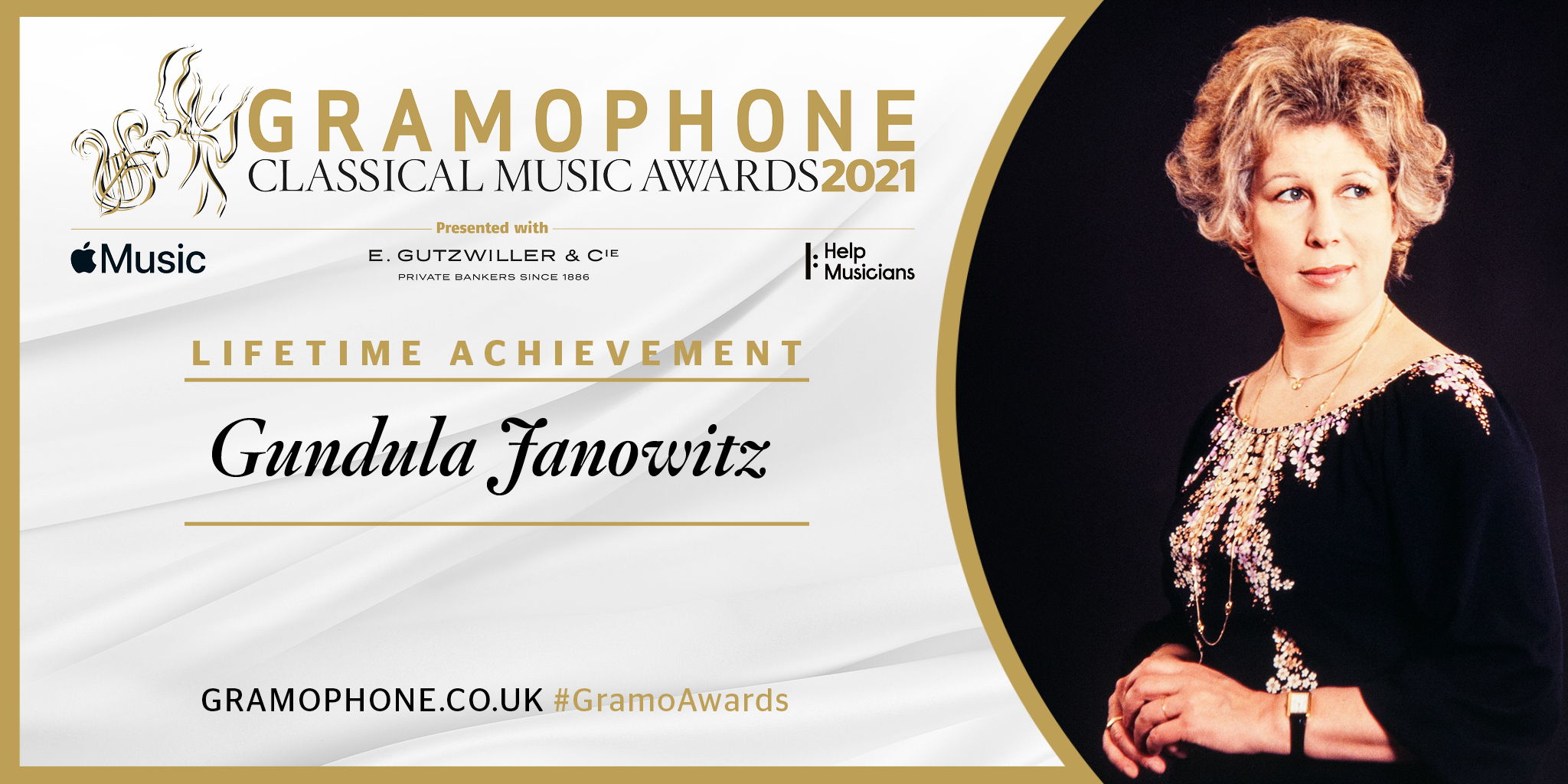 It was as the soprano soloist in Karajan’s celebrated 1962 Berlin recording of Beethoven’s Ninth Symphony that Gundula Janowitz first floated into the consciousness of the musical world. A graduate of the Graz conservatoire, she had been heard by Wieland Wagner, Wolfgang Sawallisch and Walter Legge in Bayreuth in the summer of 1959 and, shortly afterwards, by Karajan in Vienna.

Karajan knew he’d struck vocal gold. Janowitz’s friend and contemporary Brigitte Fassbaender has spoken of the voice’s ‘elegant timbre’ and Janowitz’s ‘unmistakably instrumental way of forming phrases’. It was this that Karajan recognised: a singer capable of sustaining a long line without rush or strain, yet one who could prepare and fashion text within that line in her own distinctive way.

‘Janowitz was never just “a voice”. Each role she played was thoroughly thought through, with a detailed knowledge not only of her own part but of everyone else’s’

You hear this in Janowitz’s technically flawless account of Arabella’s monologue ‘Aber der Richtige’ in Act 1 of Richard Strauss’s opera; in her realisation of Agathe’s ‘Und ob die Wolke’, ‘as exquisite a performance of this most beautiful of arias as one may expect to hear’ wrote John Warrack when this Freischütz recording first appeared; and in her singing of ‘Beim Schlafengehen’ in that now legendary recording of Strauss’s Four Last Songs, famously apostrophised by David Bowie as ‘transcendental’.

Spanning the years 1959 to 1990, Janowitz’s operatic career is of considerable historical interest, fashioned, as it was, in that now vanished age when conductors who were masters of the oh-so-difficult art of orchestral legato could work with meticulously schooled singers in collaborations that can best be described as symbiotic.

‘Karajan taught me what music is’ says Janowitz. Yet old-school Kapellmeister that he was, he ensured that she learned her trade from the bottom up. Apart from a single performance of the Empress in Strauss’s Die Frau ohne Schatten in June 1964, she sang no headline roles in his lavishly provisioned Vienna company. There were wonderful cameos (her Drusilla in the dangerous and disturbing Kraack-Karajan remake of Monteverdi’s L’incoronazione di Poppea) but you needed to be elsewhere – at the 1963 Aix-en-Provence Festival, for instance, for a famously well-received Pamina – to hear her giving what were thought by experienced observers, even then, to be benchmark performances of leading roles.

Once Janowitz had flown the nest, her career – based mainly in opera houses in Berlin, post-Karajan Vienna, Salzburg and, on occasion, Paris – was very much her own: a tale of iron discipline, sustained joy in music-making, and a series of close collaborations with some of the finest conductors and stage directors of the day.

The list of conductors with whom Janowitz recorded some of her most enduringly important roles is itself revealing: Klemperer (Pamina), Karajan (Sieglinde), Kubelík (Elsa and Eva), Carlos Kleiber (Agathe), Kempe (Ariadne), Solti (Arabella), Bernstein (who tried to ignore her but with whom she collaborated in as memorable a Fidelio as any of us is likely to encounter) and Böhm, with whom she recorded Fiordiligi, two countesses (Richard Strauss’s as well as Mozart’s) and, from J Strauss II, a wickedly amusing Rosalinde.

Janowitz’s appearances in the English-speaking world were few and far between. I can recall only an Ilia at Glyndebourne in 1964, a famously thrilling Donna Anna (one of her greatest roles, and never recorded officially) at Covent Garden in 1976, and an Ariadne there in 1987. Max Loppert noted in Opera, ‘It is some time in this theatre since we heard a German soprano singing her native language with such unforced, unexaggerated intelligence and sentience’. This Ariadne, he added, was ‘a serious, complicated, and beautiful artistic conception, fulfilled with a clear gaze, clean line, and inner conviction’.

The word ‘complicated’ is significant. Janowitz was never just ‘a voice’. Each role she played was thoroughly thought through, with a detailed knowledge not only of her own part but of everyone else’s.

She had learned her trade as an actor with such modern masters of the operatic craft as Gustav Rudolf Sellner, Günther Rennert, August Everding, Giorgio Strehler, and that prodigiously talented all-round man of theatre, happily still with us, Otto Schenk. Under Schenk’s direction, Janowitz proved to be as effective on film as on stage, two very different disciplines, not readily encompassed. Three Schenk films stand out: an uproarious, echt-Viennese staging of Die Fledermaus, the aforementioned Bernstein Fidelio, recorded live on stage at the Vienna Opera, and that near-definitive Arabella.

The Arabella has a particular appeal, both for the superlative vocal control and for a characterisation that suggests a private fondness for this charming, amusing, temperamentally wayward yet unswervingly loyal young woman.

‘Looking back,’ Brigitte Fassbaender enquired in a recent interview (now on YouTube), ‘is there anything you think you might have done better?’

‘Absolutely not!’ was Janowitz’s reply, delivered with that trademark mix of unvarnished passion and glinting good humour. ‘We were at the peak of our abilities.’

So they were. And what peaks, what abilities! Richard Osborne

Listen to our ‘Gundula Janowitz – Lifetime Achievement 2021’ playlist exclusively on Apple Music. If you are not yet a subscriber to Apple Music, it is free for the first month, boasts a catalogue of more than 75 million songs and offers lossless streaming, as well as albums in Spatial Audio. We've produced a guide to introduce the immersive listening experience of Spatial Audio here: Apple Music's spatial audio with Dolby Atmos – what is it and how do you get it?