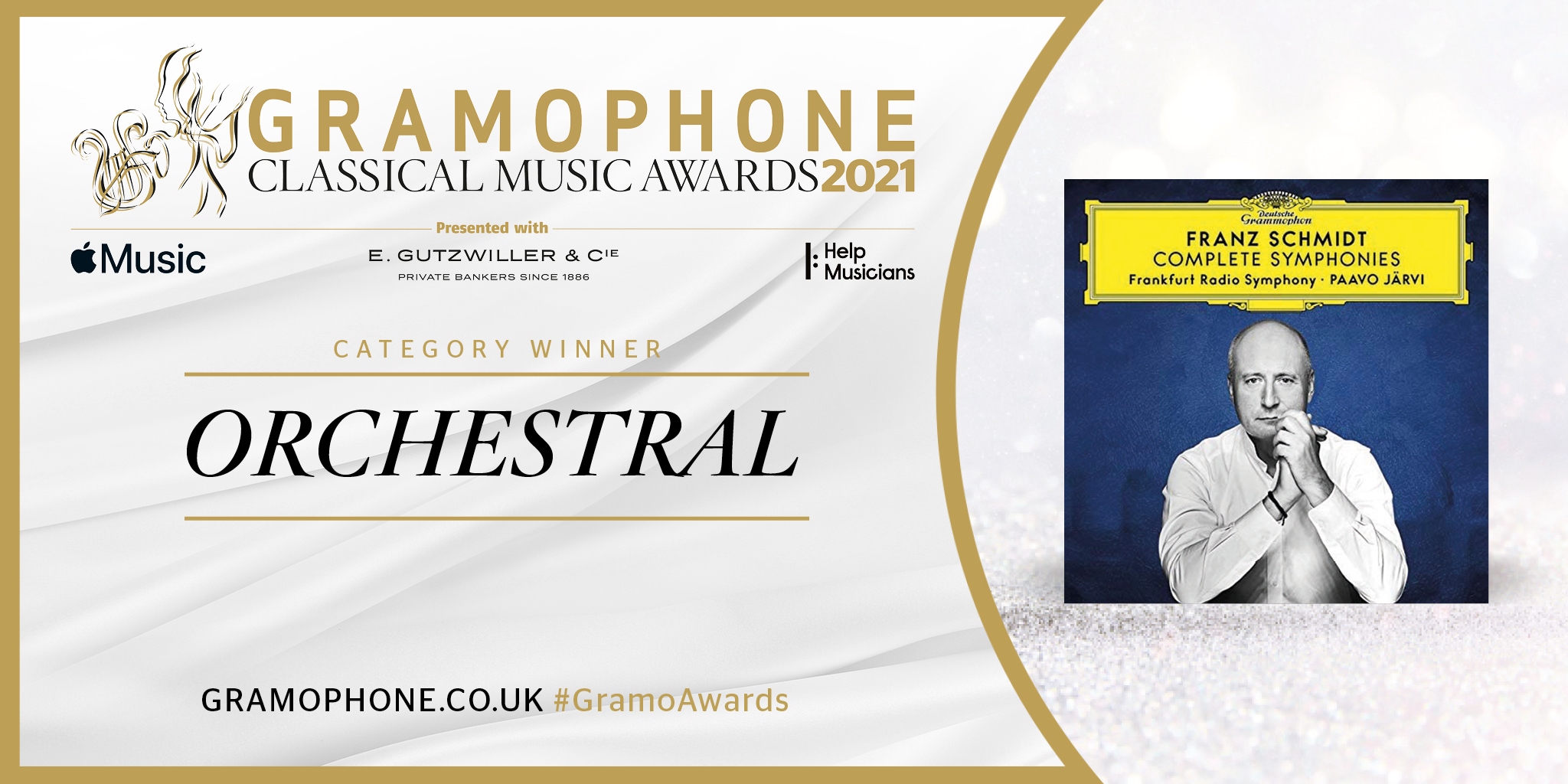 Deutsche Grammophon’s booklet note for this new recording arguably exaggerates the neglect of Franz Schmidt (1874-1939) and his four symphonies, but there’s no denying that this is a hugely significant release for the Austrian composer, and one that reflects growing interest in his work. It follows two separate recordings of Symphony No 2 that came out in 2017 (including one from the Vienna Philharmonic, Schmidt’s own orchestra at the start of the 20th century), while the powerfully elegiac Fourth, the best-represented on disc, has been given a recent additional boost by Kirill Petrenko, who brought it to the Proms with the Berlin Philharmonic in 2018.

Schmidt is clearly also a favourite in the Järvi family. Kristjan has recorded his apocalyptic oratorio Das Buch mit sieben Siegeln (Chandos, 6/08), while Neeme’s survey of the symphonies (also Chandos) with the orchestras in Detroit and Chicago still holds up extremely well as a recommendation ahead of Vasily Sinaisky’s respectable rather than exceptional Naxos cycle.

‘It makes as strong a case for both Schmidt and his symphonies as one could imagine. Essential for the composer’s fans, highly recommended for newcomers’

Paavo shares plenty of his father’s virtues in the works, not least an apparently instinctive ability to draw Schmidt’s symphonic threads together into performances that are persuasive, powerful and, thanks here to the rich-sounding Frankfurt Radio Symphony Orchestra, very well played to boot. But the new set boasts its own qualities: an unfailing musicality, an extra sense of refinement, a seriousness that never spills over into portentousness, an ability to let Schmidt’s ideas unfurl naturally.

Although captured live in Frankfurt over a leisurely five-year period, the richly recorded performances have a real sense of coherence. As a set, they allow the listener to trace Schmidt’s development in a genre whose gods were very much in their twilight. The composer eschewed both the expansion (in terms of duration and instrumentation) favoured by Mahler and the descriptive route chosen by Strauss. Instead he resolutely charted a course in the tradition of Brahms and Bruckner.

But Schmidt’s is a distinctive sound world all his own. Tonality is pushed, pulled and stretched – but never beyond breaking point. Violin lines, often sweetened with characteristic languid turns, soar up over the stave in winding counterpoint; the winds burble or weave their own tendril-like lines with hothouse lushness. Rich brass are used to underpin grand and exultant climaxes (and few come grander than that at the close of the Second Symphony) which, in contrast to Bruckner, are rooted in the sensual and the earthly.

At its best this is music of great power and harmonious adventurousness, beautifully crafted and patiently built up. At other times, admittedly, it can seem to lose its way. The finales of the First and Third Symphonies, for example, footle along towards conclusions that then seem to arrive too soon, while some melodies, especially the scherzo-like movements, have an almost complacent jauntiness that, to my ears at least, can feel unsympathetic.

The achievement of Järvi and his orchestra, though, is in making it all seem necessary and inevitable: these are compelling, supremely persuasive performances that constantly underline the music’s great qualities. Their account of the First Symphony (which won the 25-year-old Schmidt the Beethoven Prize of the Gesellschaft der Musikfreunde in 1900) sits back and revels in the work’s generous, handsome melodiousness, especially in the fine slow movement and the seductive quasi-trio section of the structurally adventurous quasi-scherzo.

They keep the Second Symphony on a tight leash, never letting its winding luxuriousness overwhelm the sense of forward momentum (sounding a touch more purposeful than Semyon Bychkov’s admittedly gorgeous VPO account – Sony, 7/17). There’s plenty of virtuosity in the second movement’s variations and a final climax of thrilling power, where the FRSO’s brass show themselves a match for Järvi père’s Chicagoans. Conductor and orchestra revel in the melodic richness of the Third Symphony’s first movement and capture the misty melancholy of its slow movement beautifully.

Finally, the performance of the Fourth (1933) is one to treasure, even more eloquent, to my ears, than Franz Welser-Möst’s refined LPO account (EMI/Warner, 1/96). The first movement’s numb atmosphere of mourning is never overplayed. The heartbreaking love song of the slow movement, teetering on the edge of sentimentality before giving in to the disconsolate funereal tread of a distant march, is deeply moving – helped by fine solo work from cellist Peter-Phillip Staemmler. The Molto vivace’s busyness is then deftly dispatched before tumbling in a heap before a powerful, moving account of the final 10 minutes. Anyone wanting confirmation of Schmidt’s stature and seriousness should start here.

And what of Schmidt himself? Maybe he’s condemned to be in a perpetual state of rediscovery, stuck in limbo on the edge of the repertory. If anything can change that, though, it’s this set: with the Notre Dame Intermezzo thrown in to sweeten the deal, it makes as strong a case for both Schmidt and his symphonies as one could imagine. Essential for the composer’s fans, highly recommended for newcomers. Hugo Shirley