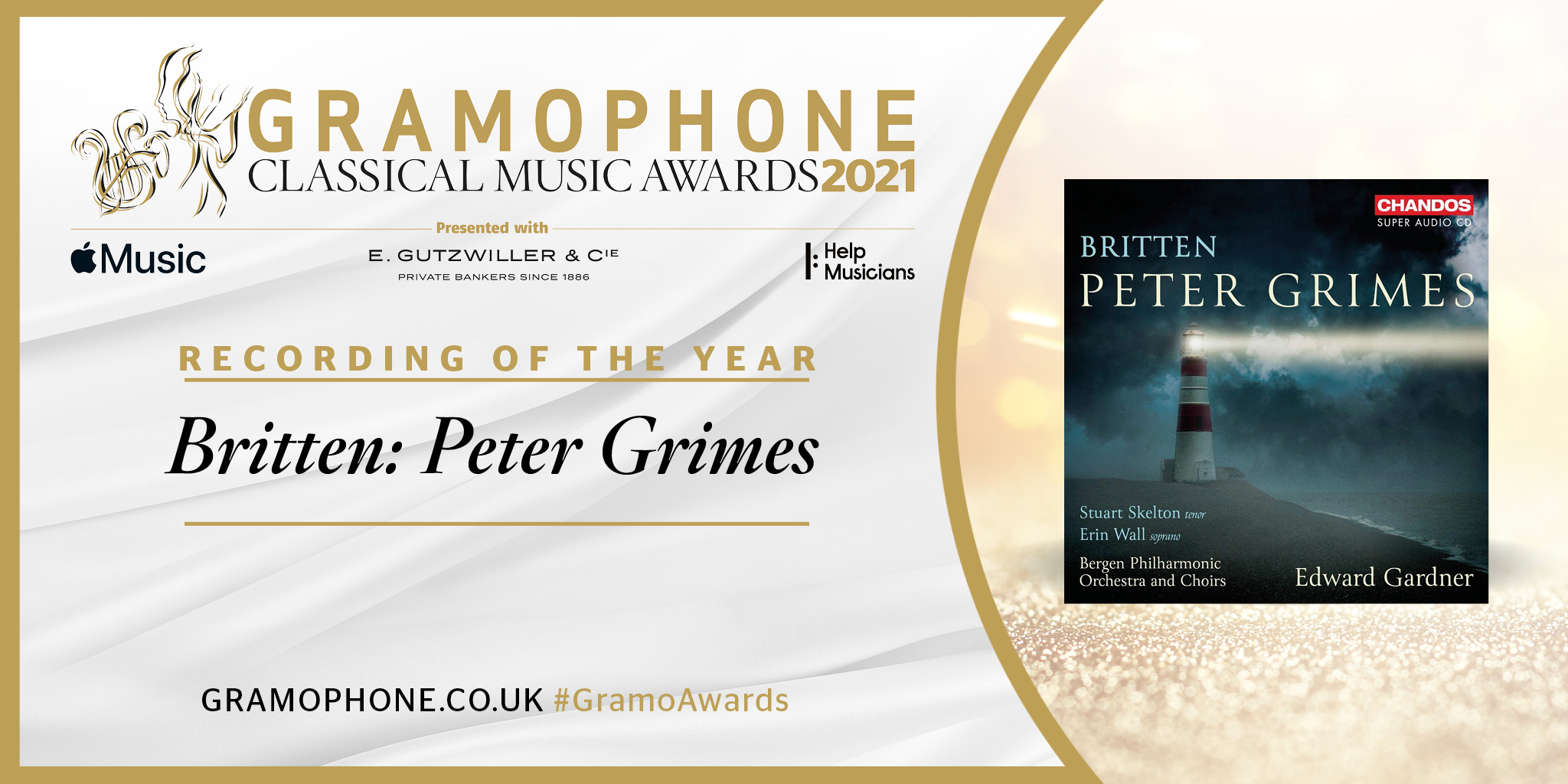 You could now round up more than a baker’s dozen recorded versions officially released of Grimes in all formats, visual and audio. That’s not bad going for a 1945 opera based on an obscure early 19th-century provincial English poem, set to music by an at-the-time hardly known composer, his opera moreover written and premiered at a time when a world war was just finishing.

Edward Gardner first established his credentials in this work with a thrilling reading of an equally thrilling, David Alden-directed staging at English National Opera. Grimes’s dramaturgical conception has always made it especially suitable for ensemble-based performances. It is a most apt choice for Gardner’s own Norwegian company in Bergen – like Britten’s Aldeburgh itself a sea-going community – and, despite the prominence of Anglophone names and performers here, the local orchestra and the local choruses stamp a distinctive mark on what we hear. A further buzz of excitement is added by the fact that the recording was made (in the city’s acoustically famous Grieghallen) following staged concert performances in preparation for a tour.

‘Gardner, Skelton and Chandos go straight to share the very top of the list, an exciting, committed, necessary and brilliantly recorded version for our times’

The strength of both the maestro’s and the leading tenor’s interpretations here is the difficult one of balance between the ‘hurly-burly’ (as the libretto has it) of the sea-going and working life of the community and the deliberately formal musical structure of Britten’s score. In the past – and especially in live performances – one or the other often has come to dominate to excess. The famous Jon Vickers reading of the title-role – one on disc, one on film, both a closely prepared collaboration with Colin Davis and stage director Elijah Moshinsky – was (and is) knife-edge ‘thrilling’ (I have to use the word again). And it was also, perhaps, a necessary corrective to the un-violent and poetically classical reading by Peter Pears, the role’s creator; it was an essential part of moving the piece forwards in the opera world’s repertoire. (We will note, but ultimately not make a judgement from, the rumours that the composer did not enjoy Vickers’s performance.)

The net joy of this new recording is that Skelton, now a Grimes of considerable experience and range, has found in his vocalisation of the role a well-judged mixture of obsessive professional (sometimes rough) fisherman and troubled, confused and persecuted outsider. He wants to do what he wants and will fight for it, a passion not a neurosis. The internal monologues (if I may call them such) – the so-called one-note aria, ‘Now the Great Bear and Pleiades’, and the hope for a permanent relationship with Ellen, ‘In dreams I’ve built myself some kindlier home’ – are neither sentimentalised nor indulged, but obviously essential outpourings from Grimes’s soul at particular emotional moments. And, as you might expect, there is plenty of power where it is needed in the Act 1 Storm and the impatience with the new boy Apprentice.

All this is precisely framed by Gardner’s conducting and his choice of cast: a cream of what one might hail as ‘obvious contemporary British talent’ (including some, like Roderick Williams’s Balstrode, now on their second Peter Grimes characterisation, but not forgetting Canadian/American Erin Wall’s Ellen). Here is well worked-in characterful singing but never caricaturing of either age or situation, a good match for Britten’s style in this score. Williams’s Balstrode manages to convey a great deal of the character and always rather ambivalent support for Grimes with little of the added bluster often delivered, while Wall’s Ellen continues what has almost become a tradition of natural-sounding and emotionally well-paced North American interpretations of the role. Elsewhere come particular delights in the scale and tone of the more comic characters – Bickley’s Auntie, Wyn-Rogers’s Sedley and Neal Davies’s Swallow. All the men in the cast make, and are allowed to make, their dramatic points well.

One of Gardner’s special gifts is most relevant here: his hearing and presentation of a wide range of dynamics, especially from mezzo-forte down. The quieter sections and asides of what is sometimes very much a chamber opera receive their full due here alongside the tutti bravado. And his choice of tempos (quite swift in comparison with some predecessors) remains ever conscious of character and situation.

The musical achievement throughout – both instrumental and vocal – seems intensified by the concentration of ‘foreign’ Norwegian (and other) elements, and is of a high and special quality. This would definitely be a phrase one could also use about Chandos’s recording, matchlessly clear, beautifully laid out and with a certain, always logical use of natural sound effects and background chatter where naturally called for. And this hall’s acoustics truly are a dream.

With such a large choice of preserved excellence – and no one has ever done a Grimes unless they really wanted to and felt the need (no routine here) – a final winner is impossible. You and your speakers and screen should at least be on terms with one of the Britten/Pears and Vickers/Davis versions, and don’t forget the strangely neglected Hickox/Langridge and Welser-Möst/Ventris (EMI DVD – nla) ones either. But let it be said that Gardner, Skelton and Chandos go straight to share the very top of the list, an exciting, committed, necessary and brilliantly recorded version for our times. Mike Ashman